The Glovers House offices on the Bexhill Enterprise Park have now been completed. The building is fully let with immediate effect to growing leisure company Park Holidays UK, whose staff move in from tomorrow, 3 December.

Allowing access to Glovers House only, the new Bexhill Gateway Road – connecting to Bexhill’s Wrestwood Road at its southern end – has opened from today, 2 December. This 850m, single-carriage road will connect through, at its northern end, to the Link Road (now named Combe Valley Way) when the Link Road opens.

Both Glovers House and the Bexhill Gateway Road have been developed by economic development company Sea Change Sussex.

Glovers House is a three-floor, 25,235 sq ft set of offices. It has been designed as a contemporary, low-energy, light-filled building with panoramic views over the surrounding countryside. 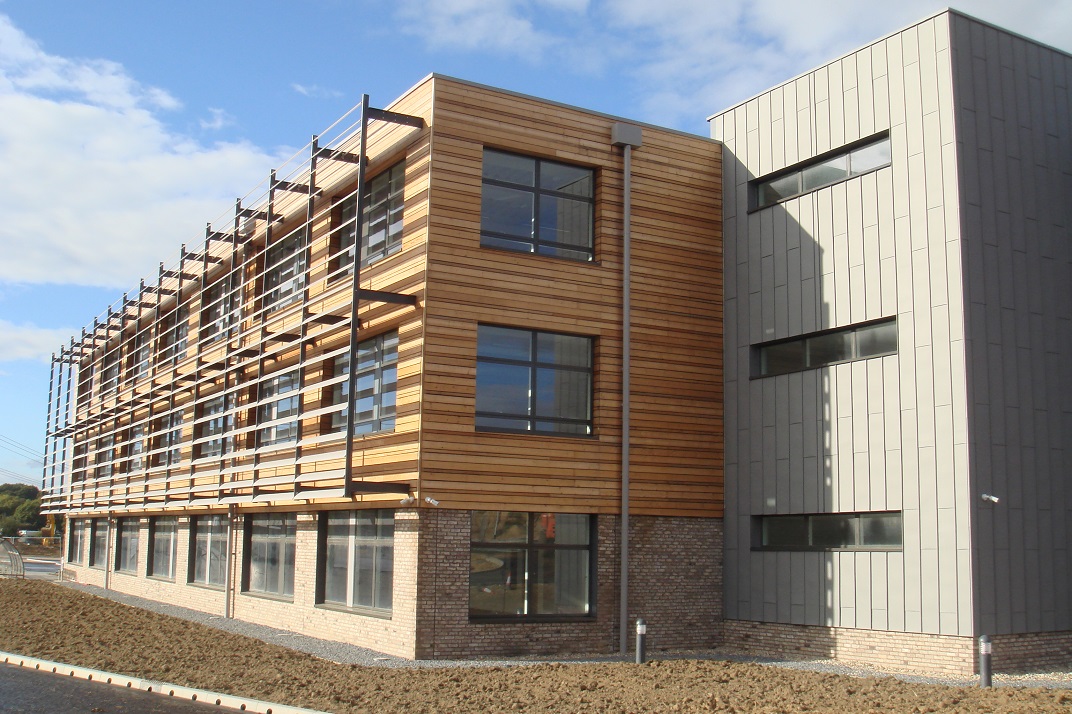 It is the first part of a wider project – being made possible by the Link Road – to develop the Bexhill Enterprise Park. The Enterprise Park is designed to stimulate the local economy and help create jobs by attracting and retaining growing employers and creating a new business community in the area.

In addition to Glovers House, sites on the Bexhill Enterprise Park are available, capable of accommodating up to 220,000 sq ft of premises. Sea Change also has plans to develop a second office building, similar to Glovers House.

Park Holidays UK is the largest operator of holiday parks in the south of England, with 25 parks from Devon in the west to Suffolk in the east. The company has been steadily growing and in October acquired a new holiday park near Margate in Kent.

It is moving, with 90 staff, from its existing base on its holiday park at Coghurst Hall, Hastings. Glovers House gives the company a new headquarters with room for expansion. Its departments in the building will include a seven-day-a-week call centre which arranges thousands of family holidays every year.

The company aims to recruit at least a further 10 people over the coming 12 months.

“For the past 26 years, we’ve been constantly growing and recruiting. But recently, limited space at our Hastings headquarters meant it was becoming increasingly difficult to expand and moving out of the area was an option we may well have been forced to consider.

“We’d already examined alternative locations including sites closer to the M25. However, the A21 improvements and construction of the Link Road persuaded us to stay in the area.

“Our move to Glovers House means we can remain committed to the geographical roots of our business and move forward in a superb new environment, purpose-built for an expanding enterprise such as ours.

“We’re particularly delighted to have additional space for staff training. We envisage recruiting at least 10 new personnel in the coming year, which could rise if we acquire more parks or increase our accommodation.

“Our move also means there’s now more room to grow our park business at Coghurst Hall, with the prospect of more jobs being created.”

Anyone interested in discussing site and office opportunities on the Bexhill Enterprise Park should contact one of Sea Change’s agents: